Fighting Spirit is a popular boxing series written and illustrated by George Morikawa. The story follows a kind boy named Ippo who spends his time helping his mother instead of making friends. Ippo was too gentle and kept to himself, making him a target for some bullies. One day, during a particularly bad beating, a professional boxer named Mamoru saved the fainted Ippo. After a while, Ippo woke to the sound of boxers training and realized that he was in the Kamogawa Gym where Mamoru practiced. Trying to cheer Ippo up, Mamoru told him to take out all his feelings on a punching bag. It was then when Ippo discovered his boxing talent and since that day, Ippo walked along the path to being a professional boxer.

What is the Japanese title of Fighting Spirit?

The Japanese title of Fighting Spirit is called ‘Hajime no Ippo’(はじめの一歩) which means the first step. ‘Hajime’(はじめ) is to start, ‘Ippo’(一歩) is a step and is also the name of the main character of this series. 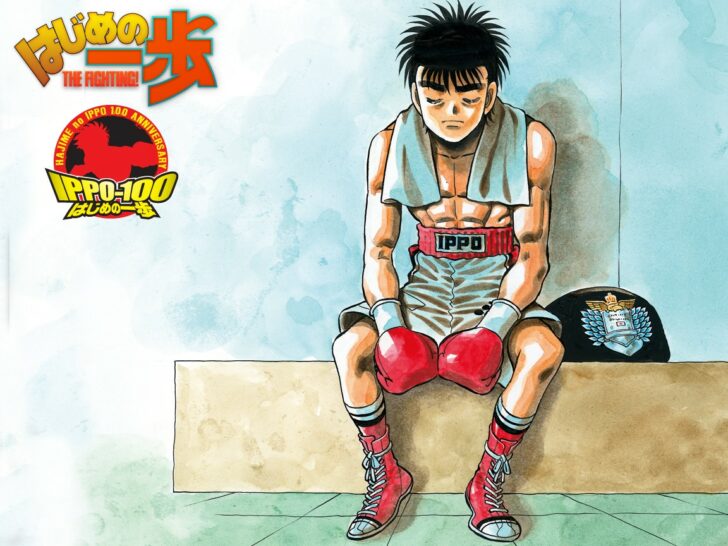 Why is it called Fighting Spirit?

It is called Fighting Spirit because in this series Ippo shows courage and resilience by showing a willingness to struggle. It is a perfect English title, however, it is not the exact translation of the Japanese one.

In Japanese culture, names have significant meanings that are supposed to represent you as a person. Names can be expressed in hiragana, katakana, and kanji. Let’s find out the meanings of some names of the boxers in Fighting Spirit. 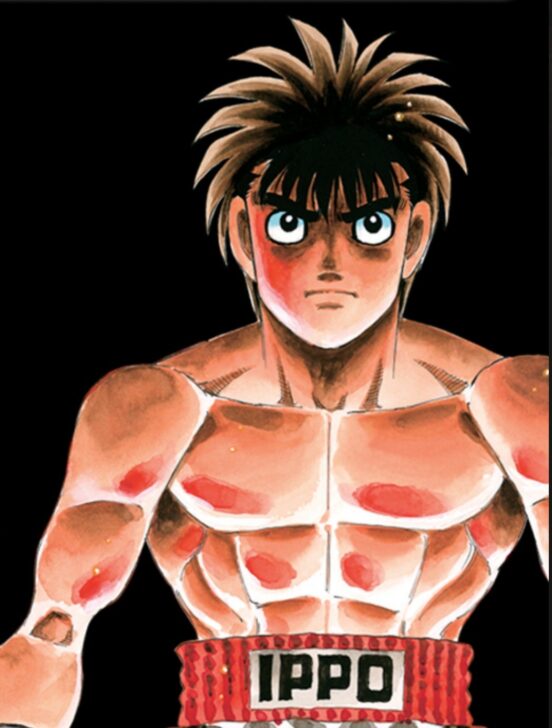 Ippo from the Kamogawa boxing gym holds the title of the Japanese Featherweight Champion. ‘Maku’(幕) is a curtain, ‘No’(之) means to go, however, this kanji is not used alone but to connect two kanji, ‘Uchi’(内) is inside or within, ‘I’(一) is one and ‘Ho’(歩) is a step. The word ‘Ho’(歩) is one of the various Japanese counter words. 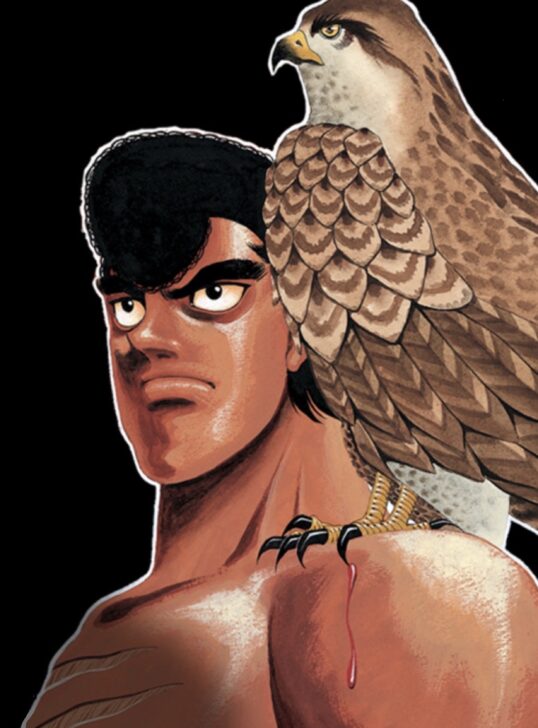 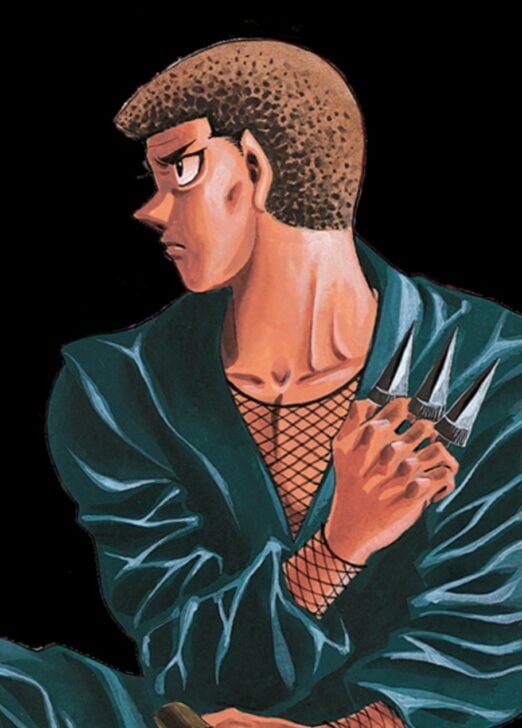 Masaru from the Kamogawa boxing gym is ranked 7th in JBC Lightweight rankings. He is known for his signature trick moves, ‘the frog punch’ and ‘look away’. ‘Ao’(青) is blue, ‘Ki’(木) is a tree, and ‘Masaru’(勝) is to win. 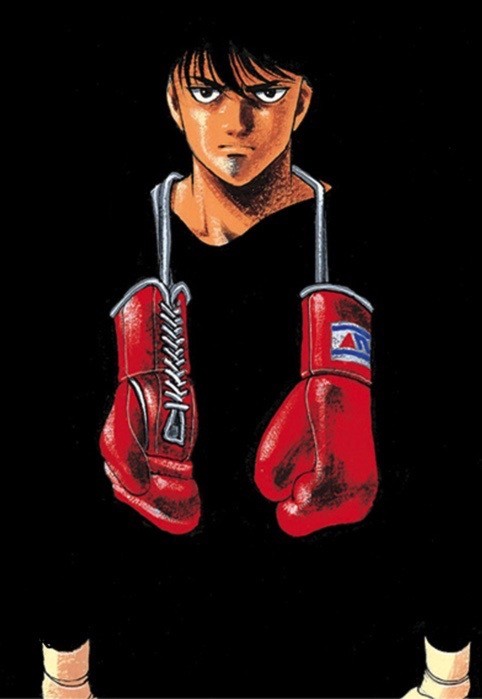 Ichiro from the Kawahara boxing gym is Ippo’s idol and a rival. He used to be in the Kamogawa boxing gym, however, left after losing the spar with Ippo hoping to re-match at an official match. He is the OPBF Featherweight Champion. ‘Miya’(宮) is a palace, ‘Ta’(田) is a paddy puddle, ‘Ichi’(一) is one, and ‘Ro’(郎) is a common ending for boys’ names.

Here are some useful phrases from Fighting Spirit that will help you along with your Japanese studies! 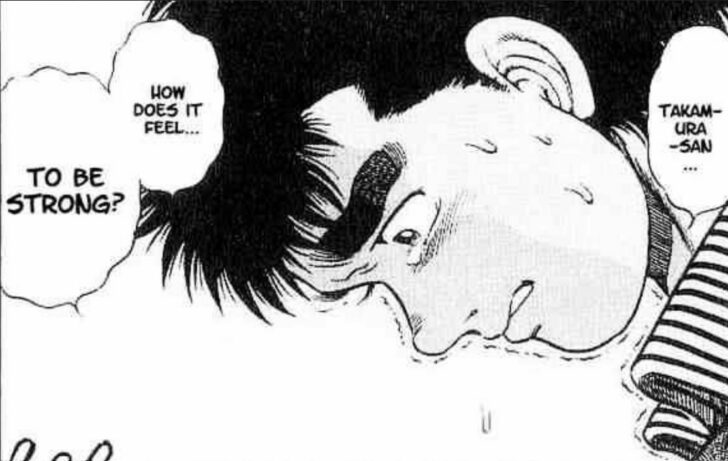 Takamura is Ippo’s senior so he adds ‘San’(さん) to his name. ‘San’ is put at the end of the names of seniors and classmates because it shows respect. People mostly use it for others older or higher ranked than them so in English, ‘San’ can mean ‘Mr’ or ‘Mrs’. ‘Tsuyoi’(強い) means strong, ‘Ittai’(一体) means what on earth, ‘Donna’(どんな) means what kind, ‘Kimochi’(気持ち) is feelings, and ‘Desuka?’(ですか) is a polite way to ask. 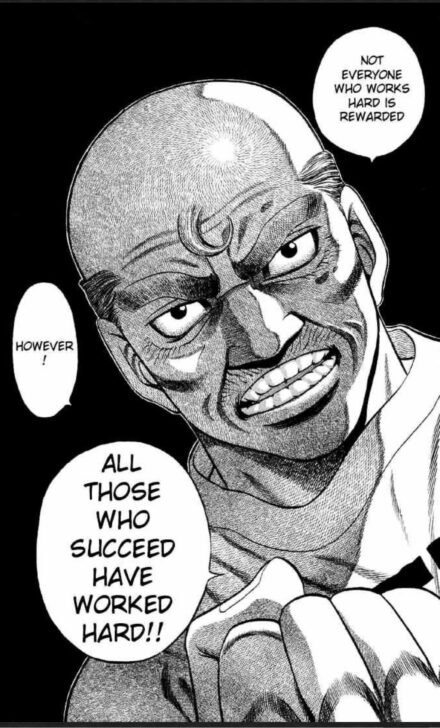 ‘Doryoku’(努力) is effort, ‘Mono’(もの, in kanji 者) is a person, and ‘Shita mono’(したもの) is those who did. ‘Subete’(全て) is all, ‘Mukuwareru’(報われる) is rewarded, and ‘Kagiran’(限らん)/’Kagiranai’(限らない) means not always.
‘Shikashi’(しかし) means, however, ‘Seikou’(成功) is a success, ‘Mina’(皆) means everyone, ‘Subekaraku’(すべからく) means in all cases. ‘Shiteiru’(している) is doing, and ‘Doryoku Shiteiru’(努力している) is putting in an effort. However, in this phrase, he says ‘Doryoku Shiteoru’ instead because that is how elderly men speak to younger people. What a moving phrase! Ippo’s master surely inspired him!