Blue Exorcist is a manga series written and illustrated by Kazue Kato. The main characters Rin and Yukio are twins who were raised by an exorcist named Shiro Fujimoto. Unlike smart and hard-working Yukio, Rin was always a troublemaker. They were living a normal life until one day Rin learns that he and Yukio were the sons of Satan and he was the inheritor of Satan’s power. After witnessing the death of his foster father Rin decides to join the True Cross Academy to be an exorcist alongside Yukio to defeat their real father Satan. 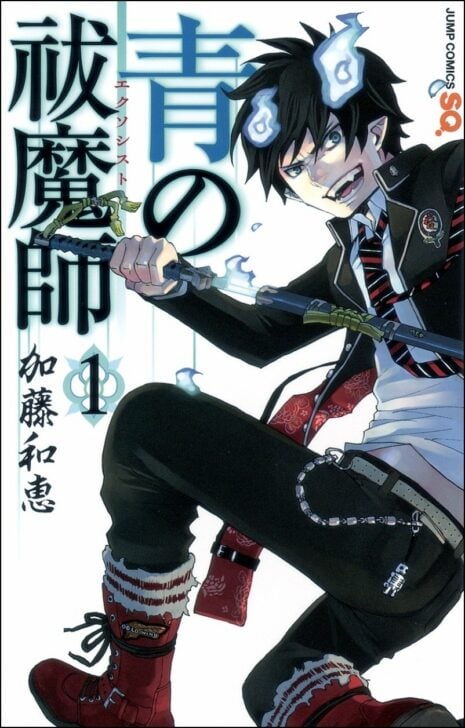 What is the Japanese title of Blue Exorcist?

The Japanese title of ‘Blue exorcist’ is ‘Ao no Exorcist, 青の祓魔師’ which is the exact translation. ‘Ao'(青) means blue and the kanji ‘祓魔師’ is read as ‘exorcist エクソシスト’ however the real sound is ‘Futsumashi’ which is the Japanese word meaning exorcist.
Blue is referring to the blue flame that Rin uses when he unleashes his demonic power. 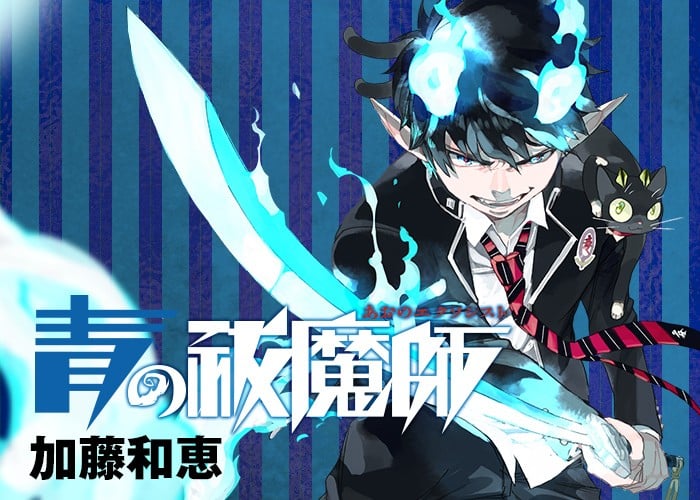 In Japanese culture, names have significant meanings that are supposed to represent you as a person. Names can be expressed in hiragana, katakana, and kanji. Let’s find out the meanings of some names of characters in Blue exorcist. 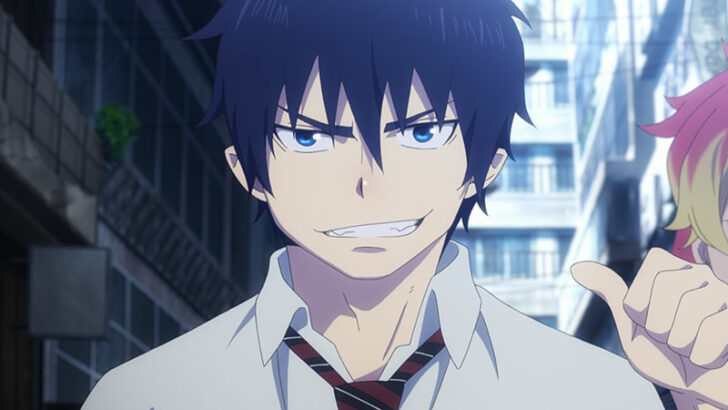 Rin lived as a normal boy but inside he had the power of Satan which was sealed by the demon slayer sword Kurikara (倶利伽羅). ‘Oku’(奥) means the inner side, ‘Mura’(村) is a village, and ‘Rin’(燐) means phosphorus or a fireball. 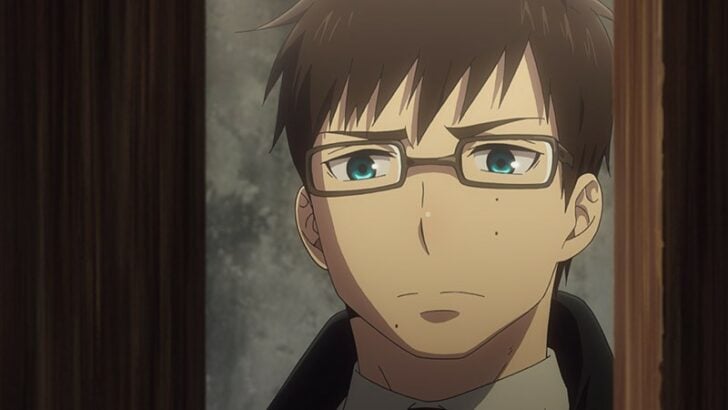 Yukio is Rin’s younger twin brother and knew the secret of their birth all the time. Shiro secretly trained Yukio to be an exorcist to be able to protect Rin. After successfully passing the exorcist exam he became the teacher in the True cross academy. ‘Yuki’(雪) means snow and ‘O’(男) means man and is a common ending for boy’s names.

Kind exorcist Shirō is the foster father of Rin and Yukio. He had died protecting Rin from the demons. ‘Fuji’(藤) is wisteria flower, ‘Moto’(本) is a book, ‘Shi’(獅) is a lion and ‘Rou’(郎) is a typical kanji put at the end of a boy’s name. 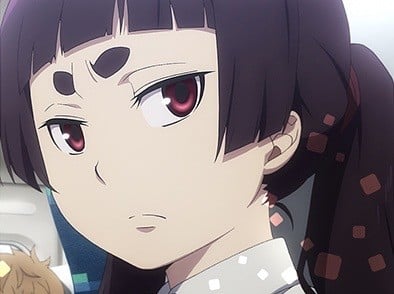 Izumo is one of the top students from the true cross academy aiming to be an exorcist. ‘Kami’(神) means god, ‘Ki’(木) is a tree. ‘Izu’(出) means out, and ‘Mo’(雲) is a cloud. One of her signature features is her eyebrow called ‘Maromayu 麻呂眉’ which is a short rounded shaped eyebrow. This type of eyebrow was common in the Nara period (8th century). 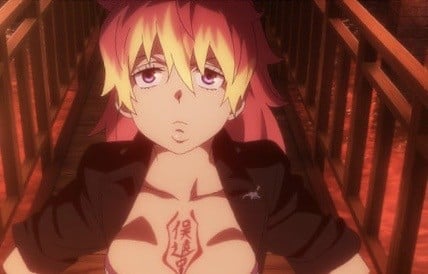 Shura is an upper first class exorcist trained by Shiro and is now Rin’s teacher. ‘Kiri’(霧) means mist, ‘Kakure’(隠) means to hide, ‘Shura’(シュラ) is written in Katakana and there are various ways to write her name in Kanji to give it a meaning.

Here are some useful phrases from Blue exorcist which will help you along with your Japanese studies! 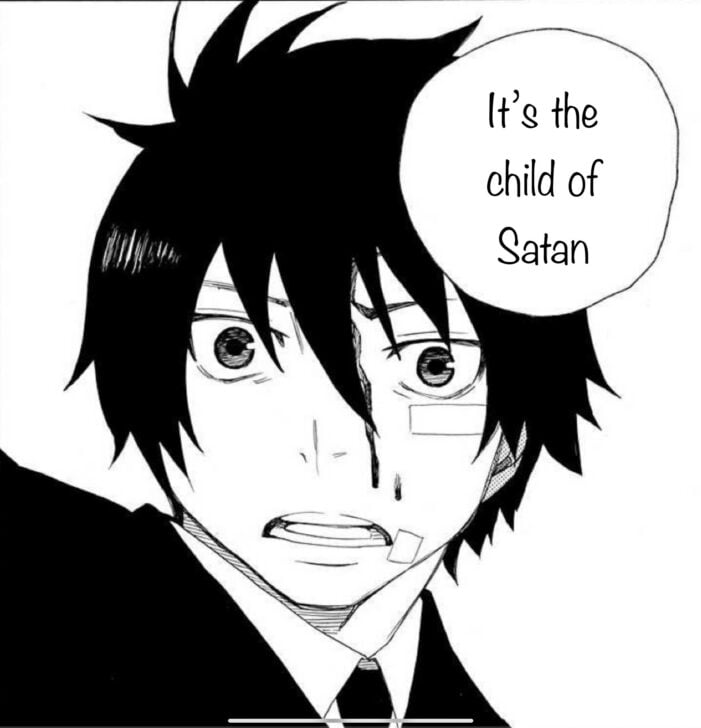 In Japanese, you can change the way to read the kanji without changing the meaning. Here it is read as ‘Satan’(魔神) but the actual sound is ‘Majin and It means devil. The word ‘落胤 Rakuin’ is also read differently and it means a bastard child. 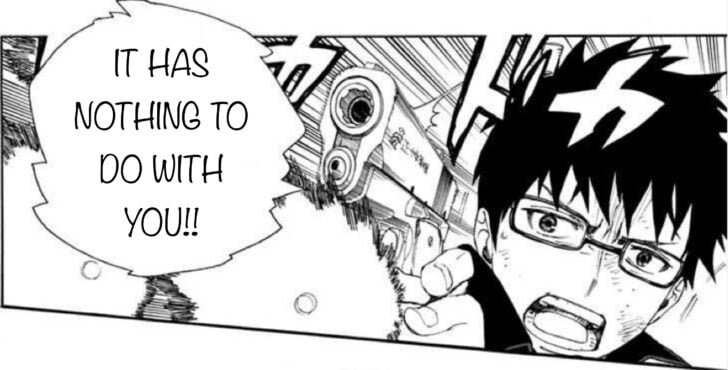 ‘Omae’ is a way to say ‘you’ however it is not so polite and it gives a rough impression. ‘Kankei’ means relation. When you add ‘Nai’ to a word it changes the word into a negative meaning. ‘Kankei nai’=’none of your business’. ‘Nai’ itself means ‘No’ or ‘Don’t have’. This is not a very nice way to talk to people so if someone is being nosy make sure to ask them to mind their own business kindly by saying ‘お構いなく！ Okamai Naku!’ 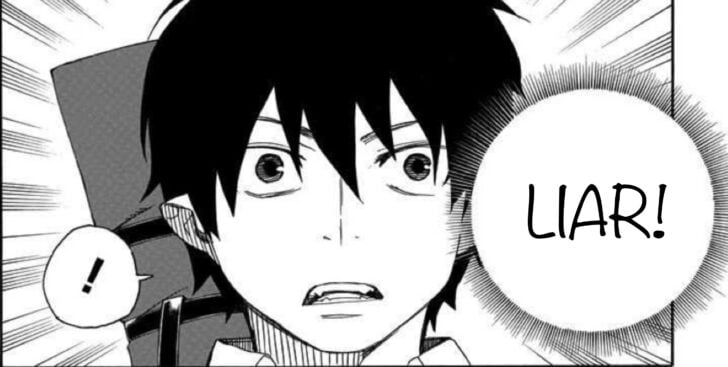 A lie is ‘Uso’, ‘to lie’ is ‘uso wo tsuku’, and a liar is called ‘Usotsuki’.
In Japanese, there are many words with the same sound but you can differentiate by the kanji it has given. Here are some examples of other ‘Tsuku’.